In the North, racist Cllr Joelene Bunting, far right/fascist Britain First, EDL and Generation Identity have also called another rally in Belfast on the same day.

There will be counter rallies in Belfast and London against these racist/fascist mobilisations.

When these groups marched in London and Belfast in June they had made nazi salutes and shouted deeply racist and sexist abuse against Muslims, migrants, refugees, women and LGBT members.

Using ‘free speech’ as an excuse they have spread the worst hate speech imaginable.

Joining a broad coalition of anti-racists/anti-fascists, United Against Racism Belfast have confronted the far right/fascists with counter demonstrations on two occasions.

We are calling a rally in Dublin on Saturday 14 July in solidarity against racism and fascism. We will march in solidarity with all anti-racists/anti-fascists in Belfast and London.

We will not allow the emergence of such forces, North and South. 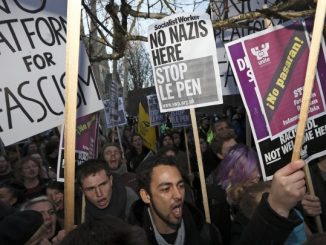