United Against Racism Sligo wish to condemn the arson attack last night on the Shannon Key West Hotel in Rooskey.

We also wish to express our complete solidarity with the vast majority of residents of Rooskey who are horrified by this blatant act of vandalism and racism.

Rooskey has recently had the media glare on it over the proposal to convert the disused hotel into a DP (Direct Provision) center.

The vast majority of Rooskey’s residents have expressed that they have no issue with asylum seekers or assisting anyone fleeing war and persecution and the town is already an inclusive diverse intercultural town.

They have also felt anger at the lack of consultation from the government who they feel has come up short around providing extra resources for the town.
Extra Teachers, care assistants, childcare, GP’s and transport have been completely overlooked in this and the people of Rooskey are entitled to have these services as a right regardless.

Many resident were shocked to learnt that the government has severe restrictions on asylum seekers right to work and the quality of care offered in other DP centers. They also were dismayed to hear that children were not allowed to further there education and work after they finish school.

The people who carried out this do not represent Rooskey or the Irish, they represent a small but dangerous minority who never actively do anything to fight for Public services, housing, education and decent pay. However they are always in the shadows putting out the suggestion that Foreigners are the cause of Ireland’s inequality.

The cause and blame of Ireland’s inequality and lack of services lies with the governments polices. Since the crisis we have seen record economic growth but on the other hand we have seen a continued decline in public services and record rates of consistent deprivation (EU SILC report).

We have also witnessed the Irish super rich tripling their wealth whilst the bottom 20% have seen a decline in real terms in wages. This is the core reason behind Ireland’s record inequality not a tiny amount of asylum seekers.  The transfer of wealth from the poor to the rich is the problem.

We have a vision for Ireland where all the children of the nation prosper, regardless of color, race, creed, gender or sexuality. In order to achieve this we must not follow the racists down the rabbit hole. It is illogical, it is cruel and it is counter productive.

When racists are using scarcity of public services and jobs as a mask for there agenda, the best counter is for us all to come together to fight against the conditions that gives racism oxygen.
Been non racist is not enough we must all become anti racist.

We should insist that asylum seekers are given the same equal rights we all have, nothing less nothing more.

We must demand public services for all, housing for all and jobs for all. This is a logical starting point, not setting fire to hotels. 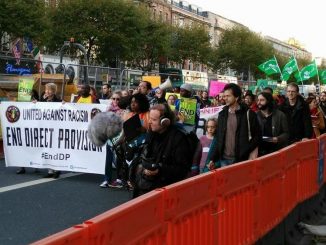