20 June, the day after our “Against Hatred and Division, Not to Racism and the Far Right” rally in Dublin is the World Refugee Day. As the crisis continues to unfold and takes more innocent lives, we have to talk about the refugees.

The UN describes the World Refugee Day as:

An international day designated by the United Nations to honour refugees around the globe. A day to honour refugees around the globe and to celebrate the strength and courage of people who have been forced to flee their home country to escape conflict or persecution. World Refugee Day is an occasion to build empathy and understanding for their plight and to recognize their resilience in rebuilding their lives.

This year the United Nations (UN) designated “Together we heal, learn and shine” as the theme of the day.

How do we mark the World Refugee Day? How are we going to stand in solidarity with refugees?

We will be publishing a series of articles and documents in the coming days to mark the World Refugee Day but also to serve as a reminder of the events of the past decade.

It was a miserably cold and rainy day in Early February in 2017. Responding to Trump’s “Muslim Ban” United Against Racism had called a protest at the US Embassy in Dublin. The embassy had issued a warning to US citizens in Ireland: Avoid the area. There could be trouble… More than a thousand people had come, including US citizens… “Not in our name”, they said, “Open the borders”.

Everyone hated Trump, including some mainstream politicians, who had shared (and are sharing) government with the Irish right-wing parties.

The Washington Post headline read “Our country is FULL!”: Trump’s declaration carries far-right echoes that go back to the Nazi era. (2019)

In June 2021, Vice President Kamala Harris gave a threatening warning to migrants: “I want to be clear to folks in the region who are thinking about making that dangerous trek to the United States-Mexico border,” she said.

The Washington Post’s indifferent headline read: “Harris warns Guatemalans they will be turned back if they come to the U.S. border illegally.” Putting the word“illegal” beside immigration makes all inhumanity OK. Dehumanization is part of all mainstream border policies.

We the Europeans like criticizing the US politicians. And it is easier to talk about far-away places and be humanitarian in our press statements. The EU and politicians of the EU states (some, at least) are masters of theories of democracy and human rights, but about their practices?

What about the border barbarism, immigration racism and the outright inhumanity of Europe? 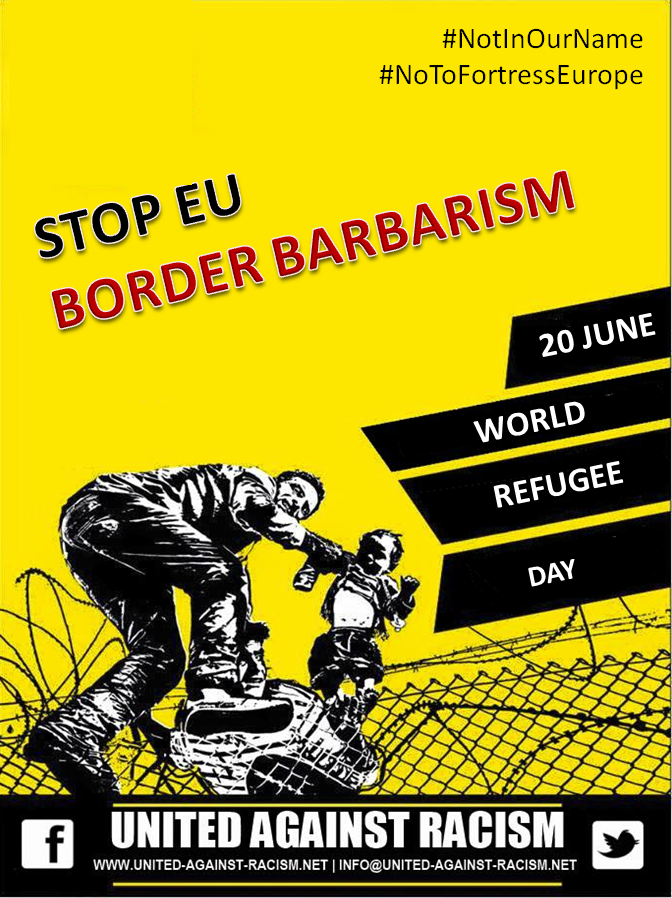 A better theme for this year: Stop Border Barbarism

REFUGEES: NOTHING ABOUT US, WITHOUT US

It is a day not remembered and celebrated by the refugees in flight. It doesn’t enter the minds of those cramped in tiny boats floating in the Mediterranean or those being handcuffed and returned (deported) back to the very same land that they escaped from in order to stay alive.

It does not enter the minds of refugees trying to avoid tear gas at the European borders or trying to survive in miserable conditions in the refugee camps on the outskirts of Europe.

The families of nearly 40 thousand refugees who lost their lives in the Mediterranean and at detention camps can’t celebrate the day.

Refugees don’t have the time or the energy to listen to the official speeches and theories about human dignity. They have death, torture, oppression behind them and barbed wires or rough seas ahead of them. They have the courage and dignity to survive and children to bring to safety.

They can’t ‘theoritise‘ human rights. They don’t have to remember what article it was in the Universal Declaration of Human Rights that said, “Everyone has the right to seek and to enjoy in other countries asylum from persecution”, they are trying to practice it.

How do we mark the World Refugee Day? How are we going to stand in solidarity with refugees?

The answers for many of us are not outside the EU borders but inside, in our capital cities, where the real root-cause of the suffering of refugees emerges from, where the European refugee policies are made and put in action. Refugees having left death and torture behind are facing renewed dangers and death at the European borders, in the hands of the EU states and governments.

We may not be able to do something about wars and conflicts in distant places and oppressive regimes may not listen to our calls but we may be able to do some things about how our regimes threat people in need of safety. And for that, we need to talk about the European border barbarism and fight against the policies implemented by the EU with full support from our own governments.

Borders matter. They are a matter of life and death for refugees chased by death. Borders turning into barbed wired fences and army patrolled no-passage zones mean death for refugees. And as the refugees risk their lives to stay alive, we have work to do here in Europe to push back our governments and fight against border barbarism and anti-refugee racism.

Unless we make the link between our governments and the needless suffering of refugees at the European borders we will not be in true solidarity with the people in need. And true solidarity means real-political action, not just charity.

Furthermore, refugees don’t get up one morning and decide to invade Europe. The reasons for their displacement are not always confined to their own countries and their regimes. A short review of the past 30 years will quickly remind us how our regimes contributed to the creation of millions of refugees due to their wars, invasions; their  support to brutal regimes, arms trades and economic exploitation of some of the poorest countries.

The list of top refugee countries over the past decades speaks for itself. Why were there refugees from Palestine, Afghanistan, Iraq, some of the African countries, Myanmar etc.? Who was involved in devastating wars and conflicts in many of these countries? What has the Shannon Airport serving for? What did Bush, Blair and others do in the Middle-East, all with the blessing of EU and Nato Countries? Who killed tens of thousands of civilians in Syria? Why are the people in oil-rich Nigeria so poor? Who sells arms to some of the world’s most brutal regimes?

Many of the answers to these questions are at home!